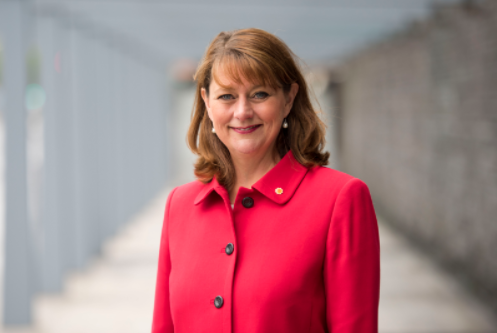 Leanne Wood, the Plaid Cymru leader and Assembly Member for the Rhondda, has thrown her support behind the campaign to keep the children’s ward open at the Royal Glamorgan Hospital.

It was announced in November last year that some midwifery and children’s services would be removed from the Royal Glamorgan Hospital in Llantrisant this summer. The shake-up follows decisions made in 2014 as a result of the South Wales Programme and means that any children needing overnight care will have to be transferred to the University Hospital of Wales in Cardiff or the Prince Charles Hospital in Merthyr.

A local campaign calling on the Cwm Taf University health board to maintain the children’s wards at the Royal Glamorgan Hospital has reached nearly 10,000 signatories on its petition and a public meeting is due to be held at Crown Hill, Llantwit Fandre on Friday, April 13th to discuss the impending closure.

Leanne Wood AM for Rhondda, reaffirming her support for the campaign, said,

‘Plaid Cymru gives our continued support to maintain vital services in our local hospital. The services provided by the children’s ward is such a valuable asset to families in Rhondda Cynon Taf. I will be writing yet again to the health board to express people’s  very real concerns. Over the coming months I will be monitoring the situation closely to see how these further changes impact upon patients.’‘Thousands of us marched against the removal of services from the Royal Glamorgan and we were not listened to in previous years when these decisions were taken. The Labour Government’s obsession with centralising services is behind this. Many people had grave concerns about travelling further to receive consultant-led care and are saying that those concerns were not addressed. People must be listened to.’‘I will be watching to see the investment and new services for the Royal Glamorgan that has been promised is fully delivered.‘It is Plaid Cymru’s view that this centralisation is being driven by Wales being understaffed in terms of doctors, nurses and other health professionals al so we will be continuing to press for those shortfalls to be addressed.’ ‘A Plaid Cymru led Welsh Government would commit to increasing the number of doctors in Wales to facilitate the reintroduction of vital healthcare services back to hospitals like the Royal Glamorgan.’