"Join us to empower your community and country” – Leanne Wood 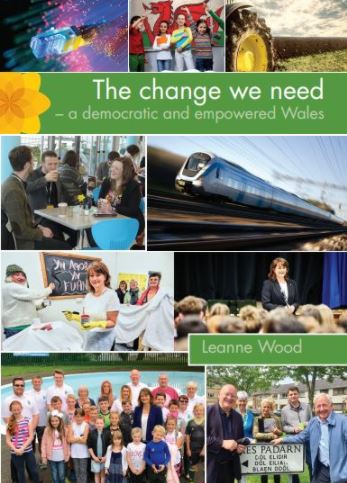 In a keynote lecture in Cardiff today, Plaid Cymru Leader Leanne Wood set out a radical agenda for ensuring that ‘decisions affecting Wales are made in Wales’ through a programme of democratisation and empowerment.

Publishing a wide-ranging pamphlet with ideas ranging from education to enterprise to democratic reform, Leanne Wood said that giving people a greater say over the matters which impact them and their communities can re-engage individuals with politics and challenge the despair which has dominated in light of a decade of cuts and the vote to leave the EU.

The Party of Wales Leader claimed that the Tories and Labour present a false choice between top-down, increasingly regressive right-wing politics, and the latter’s London-centric agenda with its stubborn refusal to yield power from Westminster or Cardiff.

In the days after the lecture,Leanne Wood will embark on a tour of Wales hosting public meetings to discuss the ideas contained in the pamphlet and engage with people on a grassroots level.

“I want people throughout this country to consider how we can lift up our country by taking responsibility for our own affairs and our own lives, and on how we can start a debate in Wales about ending our dependence on others.

“In the document, I have analysed the challenges facing our country: challenges from within the UK, challenges that following the Brexit vote, not least the risk an extreme Tory Brexit poses to Welsh jobs and services, as well as the challenges we face from global developments.

“Decisions about Wales should be made in Wales. Self-determination means that we should choose which powers we want to share with other countries or with Europe.

Yet neither an intensification of neoliberalism, nor the resurrection of British state socialism will provide the solutions that are needed to solve our economic challenges and turn Wales around.

“Both visions offered by the two largest Westminster parties marginalise our specific needs as a nation.

“We need to get out there and show people how the core weakness of Labour’s paternalistic, centralising socialism is its democratic deficit. It will neither enable people to own their own resources nor run them democratically. It won’t empower people because it doesn’t trust people.

“We should look at locating new institutions outside where they are concentrated already, as Plaid Cymru has advocated for the new transport authority, football museum, national development bank, and other bodies.

“It means ensuring that those parts of Cardiff as well as our former industrialised communities which are amongst the poorest areas of the country, can benefit from a sustainable regional approach to economic development.

“This is about levelling up, and treating geographic inequality as a problem to be tackled in the same way as other inequalities.

“For my party, it means we would legislate to ensure that legal safeguards were in place to fairly share public investment across the country, leaving no community behind.

“I also want to see a minimum set of social rights for all, such as to life-long learning, a decent home, a high standard of health care and a clean environment.

“Other principles here include using public money for public good; maximising people’s participation in democracy; co-operating as individuals instead of competing with one another; and learning from our history to look forward with hope, instead of backwards with nostalgia.”